Where Business, Tech and Innovation Collide in London!

TECHSPO London 2022 is a two day technology expo taking place September 1st - 2nd, 2022 at the luxurious London Marriott Downtown Eaton Centre Hotel in London, Ontario. TECHSPO London brings together developers, brands, marketers, technology providers, designers, innovators and evangelists looking to set the pace in our advanced world of technology. Exhibitors showcase the next generation of technology & innovation, including; Internet, Mobile, Adtech, Martech and SaaS technologies. Be prepared to be inspired, amazed and educated on how these evolving technologies will impact your business for the better.

As part of TECHSPO London is a limited attendance event, DigiMarCon Canada 2022 Digital Marketing Conference (https://digimarconcanada.ca). If the conference is where the learning, theory and inspiration happens, then the TECHSPO floor is where the testing, networking and product interaction takes place.

The TECHSPO floor is free to attend (for a limited time)! Register today! For more details visit https://techspolondon.co.uk. 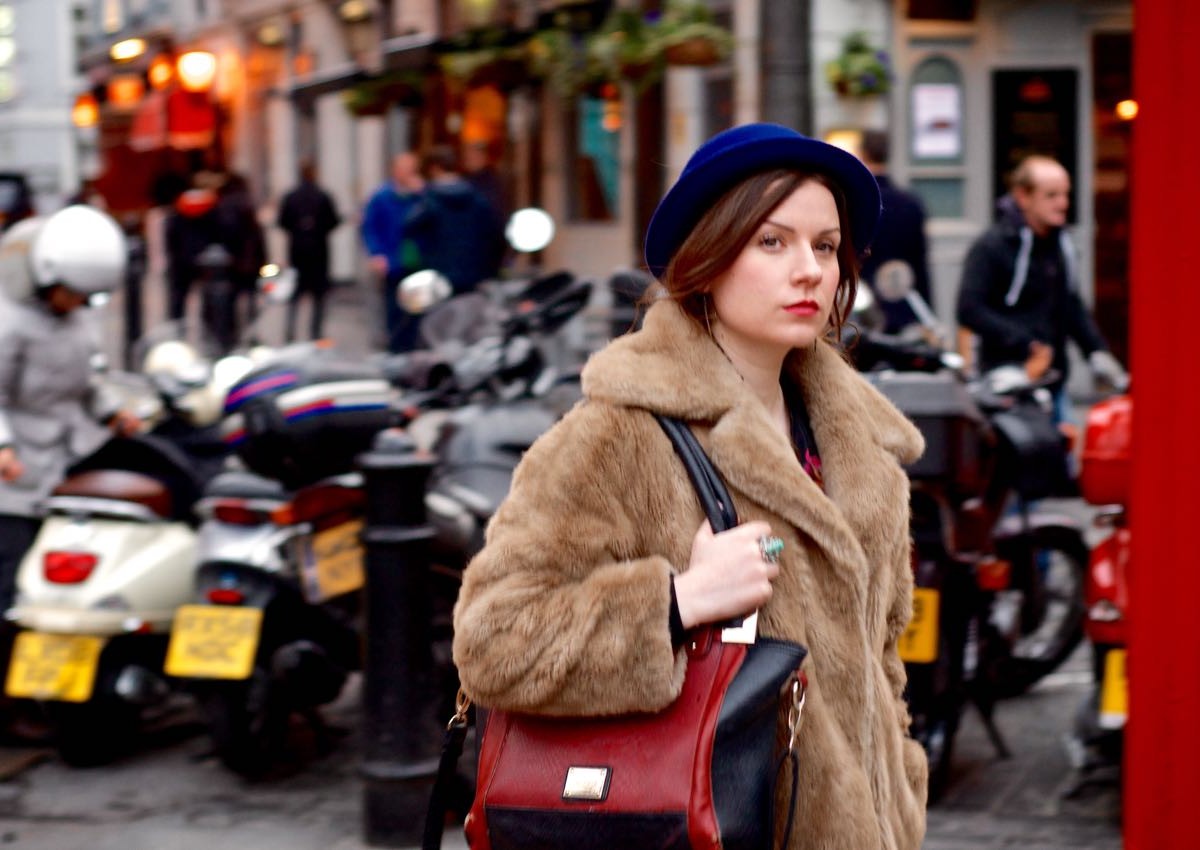 LONDON IS A SPRAWLING CITY of different neighbourhoods each with their own distinct vibe. On first impressions, it’s hard to know where to start… so here’s our guide on how to make the most of it. 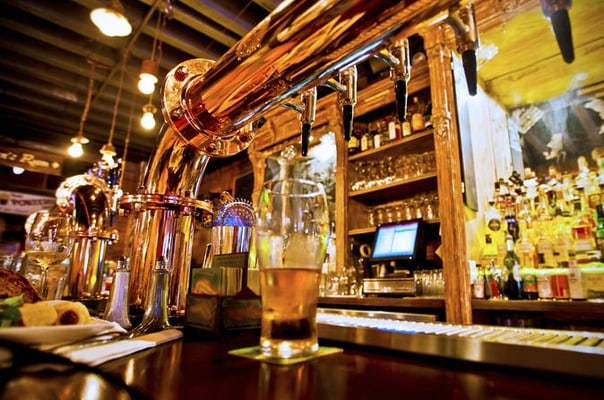 Full of bars, restaurants, theatres and major tourist attractions, this is the part of London that never sleeps.

If you’re heading to the West End, you’ve got to grab a ticket to the theatre. The hottest ticket in town is the risqué The Book Of Mormon. For original arts and crafts, head to Covent Garden Market with its bustling piazza, and for mainstream shopping, Oxford Street is the place to be. It’s also one of the best areas in London for dining so try to tick off Polpo’s Italian style tapas, cheap and trendy steak joint Flat Iron,Bombay restaurant Dishoom and ramen bar Bone Daddies. For a different vibe, take a wander down Carnaby Street — home of London’s Swinging ’60s. While it’s more commercial these days, there are plenty of cute boutiques and independent restaurants on the side streets — plus their Christmas decorations are always the coolest in London.

Camden’s home to a buzzing music scene (Amy Winehouse’s old stomping ground), a huge market, top foodie haunts and some of the city’s most beautiful parks.

Start your morning at Camden Market, checking out everything from vintage clothes and vinyl records to handmade jewellery. Stop by Cyberdog to delve into a neon underground, then grab a bite to eat in the courtyard by the canal. From sushi and falafel, to crepes and roti, you really can eat your way around the world. For a caffeine boost head to Leyas before taking a walk up Primrose Hill for the ultimate FREE view of the city. Up for a big night? End the day dancing in former stables Proud, or catch a big music act at the Roundhouse.

Notting Hill is a trendy, upmarket neighbourhood with a gritty past. Full of cute cafes and quirky shops, it’s a perfect area to spend a lazy Saturday.

Start with an epic brunch at Eggbreak before ambling down Portobello Road. Antique stores, fashionable boutiques and enticing food stalls line the route. Stop by Westbourne Park Road to snap the famous blue door from Notting Hill before joining the queue for red velvet cupcakes at Hummingbird Bakery. During summer months, venture over to Holland Park to explore the picturesque Kyoto Garden. For dinner, polish off some black cod, crab tempura and sea bass sashimi at E&O, then head for some Tiki fun at Trailer Happiness. 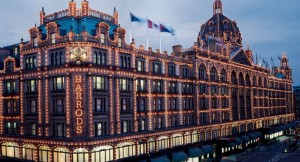 One of London’s most exclusive neighbourhoods, Chelsea is the place to go for designer labels, expensive brunches and one of the city’s top football clubs.

London’s elite spend their days strolling down the King’s Road picking up the latest designs by Vivienne Westwood, Prada and Valentino. If your credit card is suffering, take a break in the Saatchi Gallery for a dose of top contemporary art. Dining options are on the expensive side, with top picks being brunch at celeb hangout Bluebird Café, the three-Michelin star Restaurant Gordon Ramsay and less formal Tom’s Kitchen. The area get busy when Chelsea FC play at home, so unless you have a ticket, avoid at all costs!

Missing culture? Tick off Kensington’s Exhibition Road, home to the Science, Natural History and Victoria and Albert Museums all of which are free to enter. Oh and don’t miss London’s most beautiful (and historic) concert venue — the Royal Albert Hall, especially if you can bag a ticket to Cirque Du Soleil.

Start with a wander along Marylebone High Street — grabbing coffee at The Natural Kitchen before heading to Conran to check out the latest designs in furniture and homeware. Feel like you’re in Scandinavia with trips to Totally Swedish and Skandium. Don’t miss Daunt Books – one of the city’s oldest and most beautiful bookstores with its wooden balconies and stained glass window. For the ultimate tourist experience, visit the Sherlock Holmes Museum at 221b Baker Street before posing with your favourite celebs at Madame Tussauds. Book dinner at Chiltern Firehouse and there’s a chance you’ll be seated next to an actual celebrity, with everyone from Madonna and One Direction to David Beckham dining there recently. 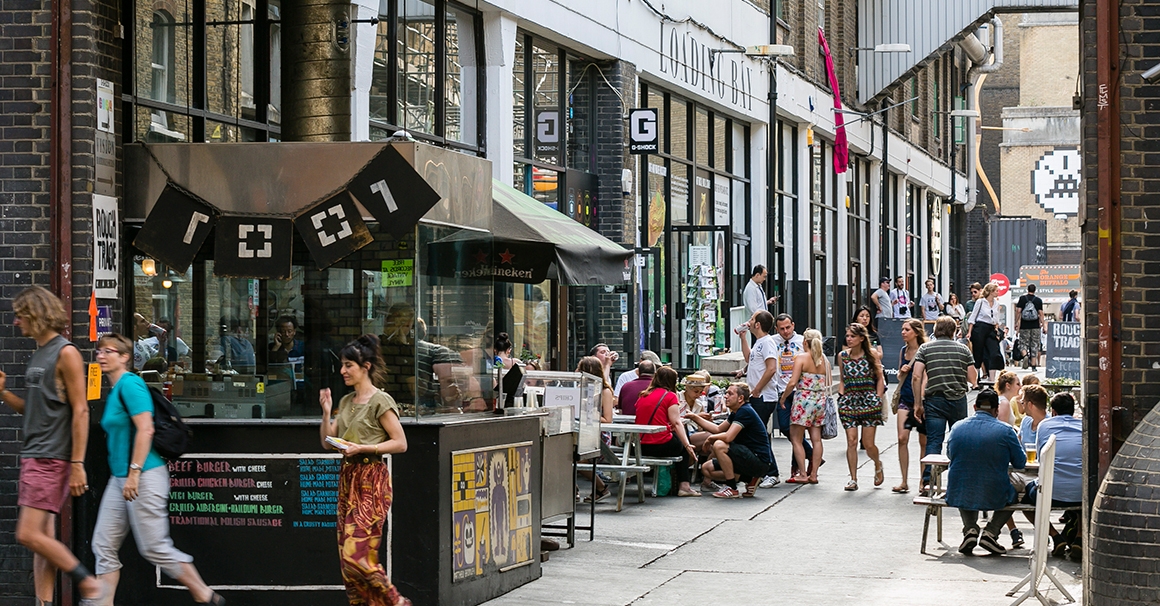 Hipster territory through and through, this is the area to go for London’s coolest nightlife, uber-trendy hotels and one-off stores.

Independent designers gather under the glass canopy of Spitalfields Market, selling everything from handmade bags and funky jewellery to vintage leather jackets. A few streets away is London’s curry haven Brick Lane. Competitive restaurant owners will lure you in with special offers while some allow you to take your own drinks. Cool murals and graffiti are all over this part of town, so take a tour with insiders SideStory to find out more about the art scene.

Nightlife options are varied, with The Book Club one of the most eclectic. Beyond the late night cocktails and dance floor, there’s ping-pong and random selection of events including knitting and singles nights! XOYO hosts DJs and small-scale gigs most nights of the week, while Hoxton Square’s Bar & Kitchen, Happiness Forgets and Zigfrid Von Underbelly all keep going until the early hours.

In the mood for a late night party, your best bet is to head down to street art mecca Rivington Street to get hot and sweaty in Cargo.

Busy during the week and dead at weekends, The City is London’s business hub. Monday to Friday, you can watch suited and booted workers marching in unison to the area’s banks and legal firms.

Several of London’s most iconic buildings are located within the city’s square mile. For the architecture alone, it’s worth walking the streets around the Gherkin, Cheese Grater and Walkie Talkie, and maybe even head up to one of the restaurants or bars.Searcys in the tip of the Gherkin has magical views of London, while the Cheesegrater’s SkyGarden offers one of the city’s top brunches with a view. Don’t miss St Paul’s Cathedral — you could even have a Mary Poppins moment and feed the birds on the steps! 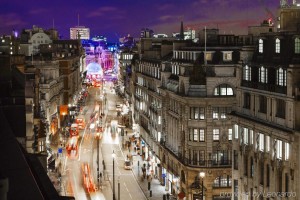 It’s the top card in Monopoly, and Mayfair certainly lives up to its expensive reputation, with designer stores, glitzy hotels and A-list nightclubs.

If budget isn’t an issue, take your pick between 5-star hotels The Connaught,Claridges and The May Fair Hotel, or go all out and stay at The Ritz.

Book a table at Sketch for afternoon tea, and make sure you take your camera to the toilets. The white egg chambers will make you feel like you’ve landed on another planet! Just a short walk away is Buckingham Palace so don’t forget to send your regards to Queenie and her corgis.

Green, pretty and the city’s naval and astronomic heart, Greenwich provides a relaxing contrast to the hectic pace of Central London.

Visit the Cutty Sark, one of the world’s most famous ships, then head to the National Maritime Museum to learn more about the city’s history. For a great view of the Thames, trek up to the Royal Observatory then stargaze in the Planetarium, home of Greenwich Mean Time (GMT) and the Prime Meridian of the World — don’t miss the chance to stand on the line itself! When your brain’s ready to explode, grab a hearty roast dinner on the river at The Cutty Sark pub, brunch in the courtyard at Peter De Wit’s Café or enjoy an ice cream from Black Vanilla and laze on the grass outside the Naval College. Saving money? Pack up a picnic and enjoy a lazy afternoon in Greenwich Park. When the sun’s out, there’s no better place to spend a day.

Gritty, lively and full of hidden gems, South London’s Brixton is a magnet for food and music lovers, especially those on a budget.

Head to Brixton Market to enjoy flavours from around the world. Ever-changing food stalls, pop-ups, and established restaurants send queues around the block. For London’s best sourdough pizza, join the line at Franco Manca or stock up on yummy dumplings at Mama Lan. The area really comes to life during Brixton Night Market, so check the dates before you visit. Brixton has a strong West Indian contingent, so cheap and cheerful jerk chicken at Negril is a must. Close by is one of London’s oldest cinemas, The Ritzy, which screens a diverse mix of films from Hollywood blockbusters to independents and shorts, but if music’s your thing, you’ll find a mix of big names and up and coming talent at O2 Academy Brixton.

AND… Hop on the water, explore the parks and take to the skies!

London has so many neighbourhoods to explore, but one of the best ways to see the sights is to get out on the Thames. From Tate Britain, hop on a boat and check out Big Ben, the Houses of Parliament, the London Eye, National Theatre, Shakespeare’s Globe, Tate Modern, London Bridge, The Shard and Tower Bridge. You’ll be able to get all the holiday snaps you need, plus when the sun’s out, it’s a great way to see the city.

As London is one of the greenest cities in the world, be sure to spend a bit of time exploring Hyde Park, Regents Park, Green Park, Battersea Park, St James’ Park, Kensington Gardens, London Fields and Victoria Park. Different vibes, varied characters, wildlife and ever-changing festivals make parks the soul of the city.

Or for a unique way to see the city, hop on the Emirates Air Line — the cable car linking North Greenwich to the Royal Docks.

REGISTER NOW FOR YOUR PASS
To ensure attendees get the full benefit of an intimate expo,
we are only offering a limited number of passes.
Get My Pass Now!

Where Business, Tech and Innovation Collide

©2014-2022 TECSHPO, LLC. TECHSPO®    and TECHSPO London®    are trademarks owned by TECHSPO, LLC.
Any unauthorized use of these names, or variations of these names, is a violation of state, federal, and international trademark laws.